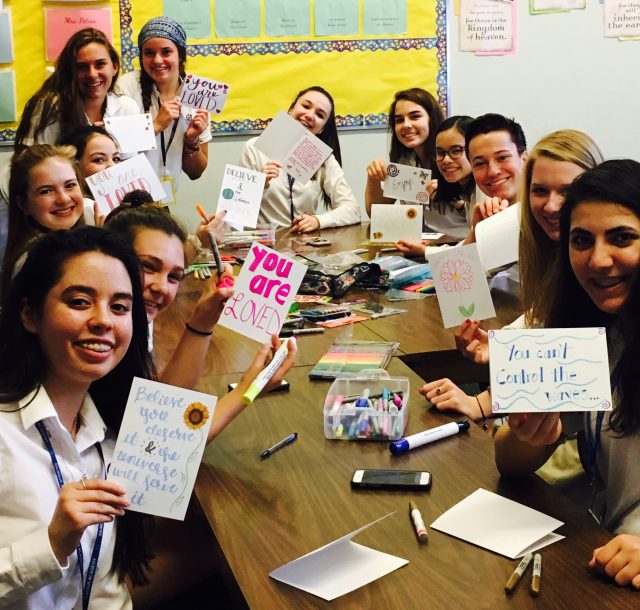 Ever have a bad day, but some encouragement from your friends and family turned it around for you? A situation like that shows the power of positivity, and how mere words can make a difference.

M.A.D. (Make A Difference) Club recently demonstrated just how powerful words can be with the start of a new project campaign: Positive Pals. Positive Pals will be a new bi-monthly project at the Gilmour Academy M.A.D. Club Chapter and the Padua Franciscan High School M.A.D. Club Chapter. For this project, members write and decorate colorful cards containing positive letters inside that are delivered to Project Hope.

Project Hope is a homeless shelter for men, women and children in Painesville, Ohio. While staying at the shelter, the people living there work to enter society once again. However, this process can be difficult and depressing at times. Peyton Rudman (`18), who is affiliated with Project Hope, reached out to M.A.D. Club with the project idea, so in late April and early May, members met to make the difference!

At the end of both meetings, M.A.D. members successfully (and creatively) crafted 50 encouraging cards. The cards included positive phrases, such as “Believe you deserve it and the universe will serve it!” or “You can’t stop the waves, but you can learn how to surf!” A letter template was also provided by Rudman, in which members introduced themselves and expressed their thoughts. Rudman shared, “I think it is possible that this one thoughtful act of love could change someone staying at Project Hope’s life!”

Before M.A.D. Club’s involvement, Rudman delivered similar cards of encouragement around Christmastime. She commented that the people cherished the positivity, and it really made an impact. “It matters to them that people really do care about them,” she says.

The goal of this new project is to leave a lasting impact on those staying at the shelter, so M.A.D. Club will continue to engage in this project in the future. Madison Wagner (`19), Executive Director of the non-profit organization and Gilmour Academy Chapter leader, welcomes new ways to make a difference. Wagner said, “We’re always on the look out for creative and fun ways to positively impact people, so I love it when people like Peyton come to us with an idea and we can turn it into a project.”

At the meetings, Wagner shared that the members had a fun and relaxing time while making the cards. Wagner commented, “We hope to change the lives of the people we help in some way, but I don’t think people realize how helping them changes us too. One of the most important lessons I’ve learned from our service is that anything, big or small, can make a difference—and yes, that includes words.”

For more information about M.A.D. Club, click the link below to learn more about it.

Volunteering to Make a Difference, One Hour at a Time

Saving Lives, One Pint at a Time

0
11
Gilmour Academy @GilmourAcademy
Thursday, October 14th, 2021 at 9:00am
This week's throwback for #TBT goes back just a few weeks - to Reunion Weekend 2021. We loved welcoming so many alumni from the classes of 0, 1, 5 and 6 home to campus! And how about that vintage "Class of 1981" t-shirt? #WhyGilmour #WeAreGilmour https://t.co/2wVjyeJH93
View on Twitter

0
8
Gilmour Academy @GilmourAcademy
Tuesday, October 12th, 2021 at 9:00am
Can you believe this photo was taken on Gilmour's campus? Comment below with what building is shown here! #TourTuesday #WhyGilmour #WeAreGilmour https://t.co/GaWs2Qan9t
View on Twitter